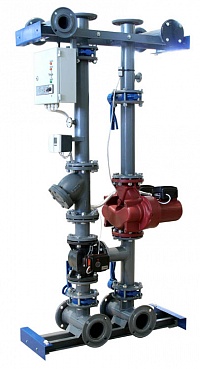 
Module-regulator of temperature is intended for regulating of water temperature in heating system depending of external wheather conditions.
The module includes the pump that produces water circulation in heating system.
Principle of automatic temperature regulation is that three-way valve of distributive type realizes the adulteration some returned water into the supply line passing by the heating modules.

Modules-regulators of AR and ARD types are applied on location of heating modules MN120, MN100 for double-sided service.
Modules of both type differ only pump construction: AR has one pump, ARD - two located parallel pumps, one of them is working, another - reserve. In case of one's breakdown the second pump will turn on.

There are such basic dimension types of modules-regulators ARD (AR, FRD):
ARD32, ARD40, ARD50, ARD65, ARD80
(figures in designation indicate internal diameter).
Other versions can be produced according special order.

Modules of constant temperature, so as modules-regulators, have either one pump (ATS type) or two located parallel pumps, one of which is working, other - reserve (ATSD type).

Modules of constant temperature has the same overall and port dimensions and the same dimension types as the modules ARD.

Back to the section